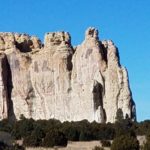 More than four centuries ago, a then modern-day traveler crossing west through what is now New Mexico, was suffering from the long travel across the high dessert. In search of relief from the relentless sun and lack of water, he sought the shade of a giant sandstone bluff to rest, or possibly prepare himself for the end his journey in life. As if by divine guidance, as he lay himself down, he turned his head, and as if a mirage, we spied a hidden oasis within a few steps of where he rested. Rejoicing, he quickly guzzled this water and reveled in its restorative effects.

He didn’t know that the inscriptions in the rock were engraved by the people who settled this area. Several hundred feet above, the plateau of this bluff held the long abandoned, 13th century Atsinna Ruins belonging to the Zuni Tribe. 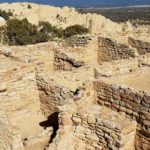 They lived in a settlement comprised of adjoining rooms, believed to have housed more than 600 people in the 13th century. No doubt they used this area for protection and for the water. He was able to continue his journey and he also carved this moment into the soft sandstone before he did. Without knowing it he began part of a tradition that continued into the 20th century.

This promotory was later named El Morro, Spanish for The Headland, by the Spanish colonialists as they travelled west. It’s also referred to as Inscription rock because of the centuries old inscriptions carved into the sandstone by 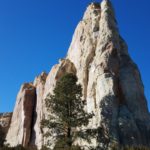 natives and other travelers who passed by. It stands as an enormous monument against the New Mexico sky near Ramah. It quickly became known for this life-saving oasis, and travelers journeyed here as they passed through on their way west.

In the time since that 1st inscription was carved into the sandstone, more than 2000 travelers inscribed their names, dates and messages. From the 14th century until the 20th, these natives, explorers, pioneers, and pilgrims left their mark upon this rock. By the 18th & 19th centuries, travelers came equipped with tools to leave their inscriptions for the future. 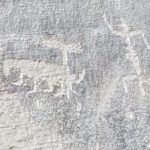 While visiting this monument for the first time, I had an epiphany: we are all trying to leave our mark, our message, our legacy for the future. We hope to inscribe into the lines of time, that we were here, that we travailed , that we persevered, that we survived, that in some way, we have shared a common journey. We want our lessons, our wisdom, our trials to aid another or speak to some testimonial of our trials and triumphs.

As I viewed the more than 2000 inscriptions in the sandstone, it was obvious that some of the oldest, were being eroded by the very elements of life, wind, water and light that shaped this huge monument. Their once deep grooves now barely visible indentations. Efforts made by the current caretakers cannot stop the nature effects of time, and they never will. 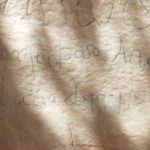 This fascination with those who have come before us is evident in the current day interest in tracing our family histories, our DNA and other similar pursuits. We search the past for meaning in our present lives. While it is important to know our roots, from whence we came, ultimately the past will be lost, just like to detailed history of the Atsinna Ruins, and so many others around the world. This leaves us dependent on our own compass, our own discoveries. We cannot pass the way of these early travelers because we are not them and we don’t face their challenges.

We must look to our future journey with the knowledge that we are, each in our way, explorers. Today we explore the inner landscape with the same excitement and determination as those past travelers explored the untamed wilderness. We experience wonderous discoveries in that inner landscape that are unique to each of us.

Instead of carving our names or messages into the sandstone, we are carving the sum total of our experiences into the energy of our life. We are sharing these experiences with one another. We have begun to understand that what we carve affects everyone as we are all connected. What messages are you carving into the lines of time?