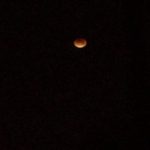 It was 5:00 a.m. and much earlier than I normally rise. But this wasn’t just another day. It was worth it.
At the time I didn’t understand how it could be, but it wasn’t long before the gift was illuminated within me. This once-in-a-lifetime Super Blue Moon Total Lunar Eclipse was happening now and I was finally in a location to see it. Just another reason why I love Albuquerque & New Mexico!

It was such a gift! The moon hung suspended directly in front of my large picture window. Mind you, I did have to sit on the floor to see past the awning partially obstructing my view. My tea in hand, I settled in just as the eclipse was starting. I felt excited!

I hadn’t had much chance to read about the significance of these rare eclipse energies. I was just happy to take it in as it was happening rather than dissect it by overthinking as I can sometimes do. I realized it had been years since I watched a full eclipse. My locations weren’t always in alignment with the positioning, or the weather impeded viewing, or most of the time I just didn’t care.

Today was different. I did care. I did want to sit in the quiet darkness and take in all the energy of it. I knew it was important for me. I just didn’t know why. That tends to be the theme of my life especially over the last 10 years or so. I feel nudged, inclined, impulsed or otherwise driven to take an action without really knowing why or the importance of it. Today was no different.

Now here’s the really interesting part. Of course, like most people watching the eclipse, I tried to photograph it with my cell phone during the different phases of the eclipse. However, the camera couldn’t pick it up. It just looked like a full moon. It wasn’t until the entire moon was eclipsed reflecting red, that the camera could see it as I saw it. That’s when it struck me.

How often do we have these experiences in life? We see something one way, as reality, as truth until another sees it another way altogether: as a different reality, a different truth. No less real. Can we wait out the time it takes for things to shift, until we see the same thing and then work in that moment to find a common reality, a common truth?

And what about being eclipsed? How often am I the Sun: shining steadily, casting light on everything around me? How often am I the Earth: getting between the Light and another, forcing them into darkness, even temporarily, causing them to glow red, threatening their sense of safety and security?  How often am I the moon: present half of the time, cast a pale glow or a dark shadow on those around me; a reminder to rest and restore, as I do, so they can glow again tomorrow?

Even now as I write this, I’m in surprised. You see I planned to write this about eclipses in our own lives, and in my inspiration, the message changed. As I said, I feel nudged in a direction and I know enough now to be loose and go with whatever presents itself. I think this message is so much better than the one I had planned. Today, my ideas were eclipsed by something greater. I’m grateful for that.